In 2019 a paper by Google researchers appeared on a Nasa website. The paper claimed that Google had built a quantum computer that could carry out calculations beyond the ability of today’s most powerful supercomputers.

This landmark achievement led many to herald a new age of ‘quantum supremacy’. Quantum computing has the potential to allow us to increase our computational power many-fold over conventional computing, solving significant problems well beyond our current capability.

This is an industry in its infancy; however, governments and venture capitalists are already investing substantial sums of money, with a rapid acceleration of investment in 2020 and continued activity in 2021. In this article we look briefly at potential use cases and review some of the investments that have been made in this space.

A traditional computer uses binary elements or ‘bits’ which represent zeros or ones that store data and execute instructions; the computer will operate by manipulating long strings of these bits containing a combination of zeros or ones.

Quantum computing differs in that it employs quantum bits, or qubits, which can be set to both zero or one at the same time. This is a quantum property known as superposition, it allows users to crunch through a vast number of potential outcomes simultaneously, allowing quantum computers to operate at greater speeds than conventional computers.

The properties of quantum computing have the potential to re-shape industries and make current technologies obsolete.

Take drug development for example, the main technological limitation facing researchers is that classical computing struggles with optimisation problems – finding the best solution by testing all feasible solutions. To develop drugs, researchers must simulate a compound’s most stable configuration. Given the limits to classical computing’s computing power, researchers are unable to process all the data needed to find this configuration for larger molecules. In theory, quantum computers are much better equipped to process mass amounts of data allowing drug developers to quickly identify these configurations, cutting research costs, and reducing time to market for new drugs.

Another issue to be considered is security. Many important aspects of IT security rely on encryption and public key cryptography. These are based on mathematical algorithms that are hard to break. Usually these algorithms are immune to ‘brute force attacks’ (ie high computational capacity attacks), however it is possible to create unique algorithms for quantum computing that dramatically reduce the time it takes to break these algorithms. This would jeopardise most practical applications of cryptography in use today, creating major disruption in the cyber-security sector.

It does not come as a surprise that a technology as promising as quantum computing has received strong attention from investors. 2020 was a big year for quantum computing, with many commentators dubbing it the ‘quantum goldrush’.

Indeed, data from Pitchbook (see fig.1) shows that over €400 mn was invested into Quantum Computing in 2020, a 183% yoy increase from 2019. This is still small in comparison to AI, with AI start-ups raising $18bn in 2020, but given the vast potential of quantum computing, we expect capital allocations to quantum computing to continue to increase in future years.

As of May 2021, investor appetite for quantum start-ups has shown no signs of diminishing, with a further €120m being allocated toward quantum computing start-ups. Notable transactions include:  Quantum Xchange, who develop quantum cybersecurity solutions, raising €20m from New Technology Ventures; and Riverlane, developer of quantum computing software, raising €16.5m from Amadeus Capital Partners. 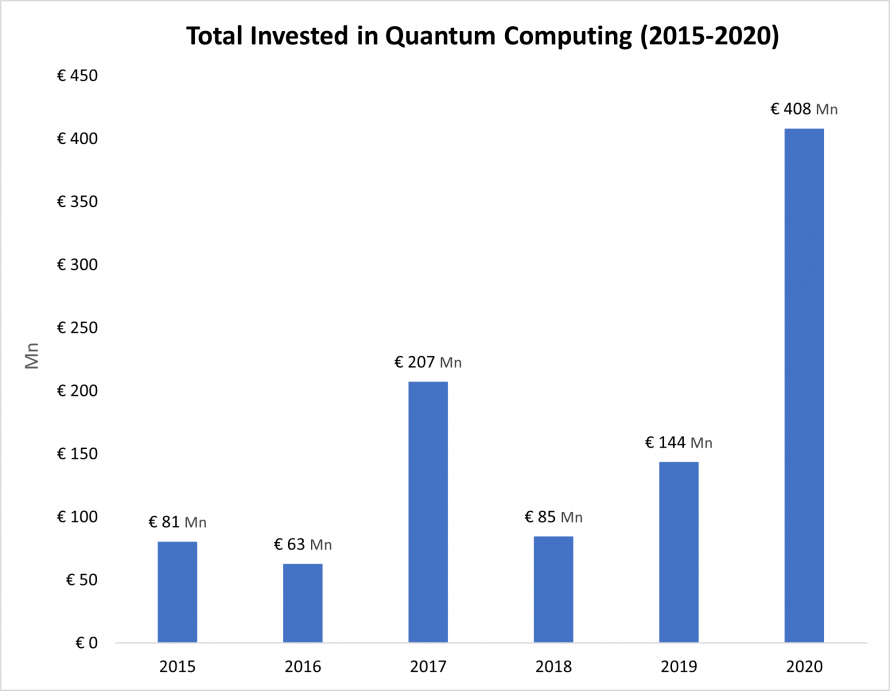 Most of this capital has gone towards quantum computing hardware and processors. Firms like IBM, Google, D-Wave and Honeywell have all developed their own quantum hardware and computers. Quantum software has also been another strong focus, with companies crafting algorithms that aim to solve some of the problems discussed earlier. Companies like Zapata Computing, 1Qbit and Cambridge Quantum computing have been developing quantum software and signing contracts in industries such as aerospace, finance, and defence. Quantum communications has been the other major segment. This uses quantum properties to create cryptographic keys that enable secure data transmissions. The leaders in this field are largely Chinese firms like QuantumCTek and Oaksy.

It is still the early-stage players that are the most active. Much of the capital deployed comes from seed investors, early-stage VCs, government grants and accelerators. To date there has been little M&A, IPO, or PE activity (see fig. 2) as the companies involved are largely too early stage and the industry is not mature enough for acquirers to get involved at this stage while commercial use cases are still emerging. 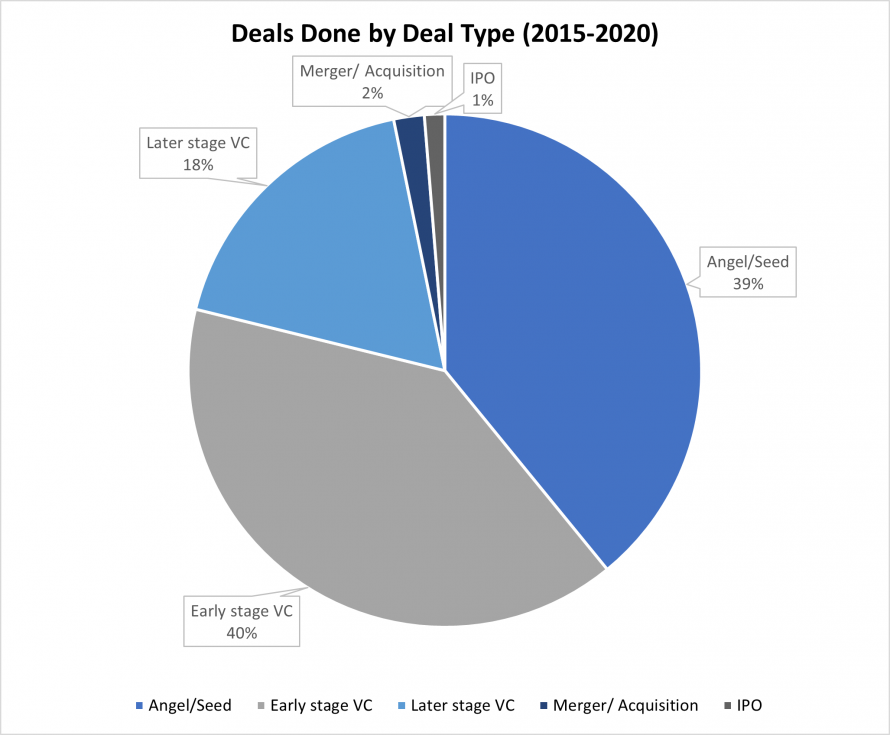 When it comes to geography, western nations have dominated this space in terms of deal count, with Europe leading in the number of deals done in the QC space between 2015-2020 (see fig.3). That said the data we are seeing from Asia, specifically China, is likely artificially depressed given that a large number of Chinese state backed VC firms do not disclose investment information. Data collected by Elizabeth Gibney suggested that almost only 1 in 10 fundraising deals secured by Chinese quantum computing firms disclosed its value. If we look at patent activity we see that 43% of the quantum computing innovations that took place between 2012-2017 came from Chinese firms, so it is fair to assume that deal count and capital invested is much higher in China than the data currently suggests.

At a governmental level, fears that other countries are edging ahead in quantum computing have recently stimulated a burst of state-sponsored investments. India (US$1.12bn), France (US$ 1.35bn), the United States (US$ 1bn) and Russia have all announced plans to finance research in quantum computing. It is also reported that the Chinese state is investing heavily (and discreetly) in the technology, with some estimates that it has invested x10 more than the U.S. already.

Quantum computing is evidently a technology with vast potential, and is attracting increasing investment from both private and public interests.  While to date VCs have largely been key in supporting these high risk innovations, we expect to start to see firms progress past early-stage funding, attracting other forms of financing as well as strategic M&A.